View cart “Tibetan Mandala Rug Handwoven by Artisans in Nepal” has been added to your cart.

Mudra, the Sanskrit word usually denotes a hand gestures and finger postures that are used in Buddhism. Such Buddha mudra is associated with the images of Buddhas and Bodhisattvas to represent different teachings and philosophy of Buddhism.

A statue or painting of buddha always illustrates a Mudra. Among hundreds of mudras, the five transcendental Buddha’s also called "Dhyani Buddhas" or "Pancha Buddhas" bear the most important mudras.

Five Mudras of Dhyani Buddhas and their meanings are as follows: 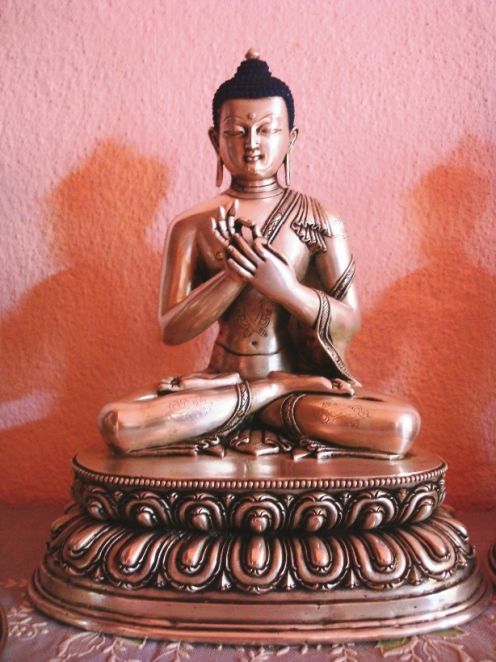 Vairochana is regarded as the first Dhyani Buddha in Nepalese-Tibetan Buddhism. He represents the cosmic element of Rupa (form). His two hands are held against the chest with the tips of the thumbs and forefingers of each hand united. This mudra is called Dharmachakra Mudra which is the gesture of Teaching. Literally, Dharma means “Law” and Chakra means wheel and usually interpreted turning the Wheel of Law. It is also gesture of hands exhibited by Lord Buddha while preaching his first sermon at Sarnath. 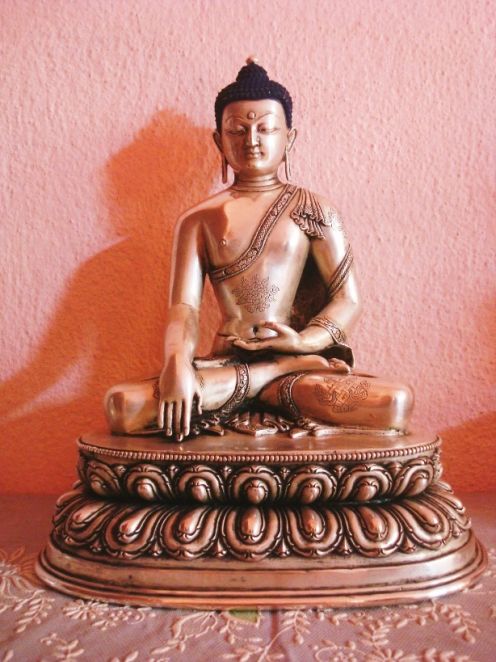 Akshobhya is regarded as the second Dhyani Buddha in Nepalese/Tibetan Buddhism. He represents the primodal cosmic element of Vijnana (consciousness). Buddha Akshobhya can be seen sometimes riding on an elephant symbolizing the steadfast nature of his Bodhisattva vows. His right hand displays the Bhumisparsa (earth-touching) mudra. This hand gesture is linked with the life of Shakyamuni Buddha. When Shakyamuni Buddha was on the verge of ultimate Enlightenment, he has to face both internal and external Maras. It is believed that Devaputra Mara questioned him on the validity of his attainment of Enlightenment and his perfection of Paramita. At that time, his only witness was the earth. Buddha Shakyamuni asked mother earth to bear witness to his attainment of Enlightenment. To indicate this, he touched the earth with his right hand as witness to his perfection. This gesture, called “touching the earth” (Bhumisparsa Mudra), became Buddha Akshobhya's Mudra. 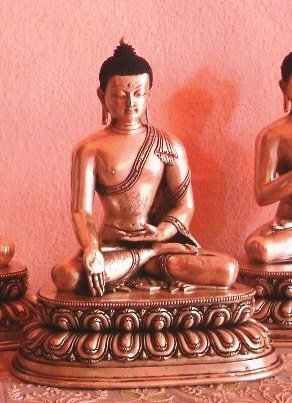 Ratna Sambhava is regarded as the third Dhyani Buddha in order. He represents the cosmic element of vedana (sensation). His recognition symbol is the jewel and he exhibits the Varada Mudra. His right hand lies open near his right knee. His left hand is seen holding an alms bowl. In Sanskrit, Varada means 'granting a boon'. The gesture shows the right palm turned towards the receiver of boons, with the fingers pointed downwards. 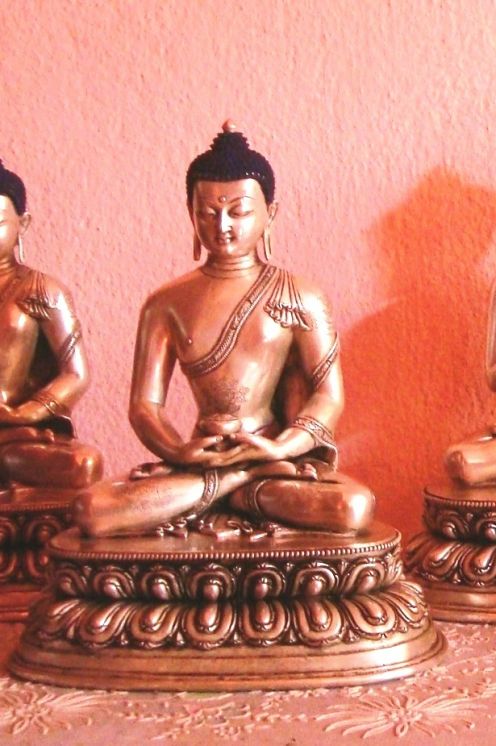 Amitabha Buddha is the most ancient Buddha among the Dhyani Buddhas. He is said to reside in the Sukhabati heaven in peaceful meditation. He is seated in a meditating position. This Mudra is called 'Dhyanamudra'. His palms are joined together with the right on the left, two thumb fingers touching each other. An alms bowl is between his two palms. Here the meditating hand gesture represents the unity of wisdom and compassion. 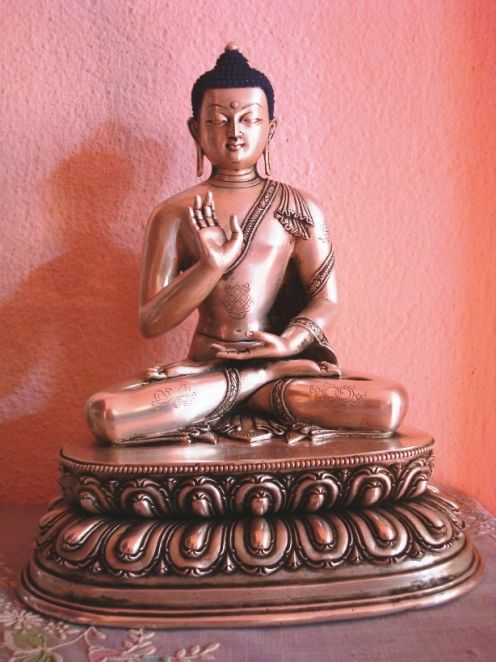 Amoghsiddhi is the fifth Dhyani Buddha in order. He represents cosmic element of Samskar (Conformation). His left hand lies open on the lap and the right exhibits the Abhaya Mudra. The gesture of fearlessness and protection, usually shown as the left hand with palm turned outward and all fingers extended upwards. The symbolic meaning of the dispelling fear pose is an interpretation of the action of preaching. It is said that one gains fearlessness by following the Bodhisattva path.

Each Dhyani Buddha has corresponding or relevant female deity or consort and Bodhisattva. They are as follows.

There are the five dhyani buddha mudras explained in detail. However, If you want to know about how the Buddha statues are made do check this article Making of a Buddha Statue.