Why do Buddhists honor Buddha Statue? 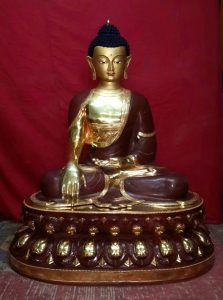 Buddha Statue for Inspiration to meditate and grow spiritually: Buddhists do not worship Buddha statue as a god but rather take it as inspiration to practice mediation and apply teachings of  Buddhism. Buddha statue stands out being a focal point to get inspiration for meditation and even other forms of meditations like yoga. It also act as a symbol of truth and reminder of teaching of Buddha which is the route and direction towards enlightenment. This is the primary reason Buddhist keep some form of Buddha rupas in their home, meditation altar , living rooms and even in gardens. They can come in a buddha statue, thangka painting, prayer flag, prayer mala, jewelry like pendant, necklace and earrings. They can also come in other ritual objects like mandala, prayer wheels etc. However, lets focus on buddha statues here in this article.There are many different kinds of Buddha rupas. How do you go about choosing the right one for you? Before you can make decision you need to ask yourself this question first.

Why do you need to have a Buddha statue?

It is really important to understand why you need one at first place. Simply try to answer to the question "why do you need to buy a Buddha statue?" Trying to find the answer will help you a lot in making the right decision in selecting the right one. You have to listen to your own inner-self. So close your eyes, take a deep breath and ask yourself the above question. Ask your soul and you will find the answer.

To help you get started, here are the basic things you need to understand.

1. Buddha Statue for spiritual reason If your purpose of buying then it is about helping yourself achieve inner peace and happiness. The statue will help you practice meditation better to purify your mind and soul. In this case, you can opt for Meditating Buddha statue or Shakyamuni Buddha. Putting buddha rupas in our altar gives the visual re-assurance that we are on the right path to Nirvana. It gives you the confidence. You will feel that the teacher is in front of you with all his valuable teachings to ultimately break free from this life cycle, sorrow and pain to achieve ultimate state of "Nirvana"

2. Buddha Statue to liven up your life. If you however, want to get inspiration with the image and create happy mood with joy and liveliness in your life, happy Buddha or laughing Buddha may be appropriate one.

3. Buddha Decor to server as Ambience: However, the Buddha Sculpture can simply serve as great ambience to your living room or showroom as Buddha Decor specially if you want to share and appreciate your passion and love for the artwork. In this case, you can go for Golden Buddha, Antique Buddha as well as oxidized Buddha.

4. Zen Garden Buddha Statues, big Buddha statues specially made of stone, bronze and even marbles can be appropriate to your if you plan to harmonize environment of your garden with peace

Who is Buddha? What is the meaning of a Buddha?

Buddha isn't God but a man just like us but big difference is he is the enlightened one. His name is Siddhartha Gautama. Buddha indicates one who has awakened towards the reality. Born in a wealthy royal family in Lumbini, Nepal around 5th century BC, younger Siddhartha was obviously a cosseted royal prince. His doting mother and father, hoping to spare his lifetime’s pain and suffering, sheltered him from anything uncomfortable that might trigger him from thinking that his life is not perfect and start wondering about finding the truth. He never knew anything about poverty, sickness, death, or perhaps any of the common day to day problems.

One day as a young man, the prince wandered off and noticed the actual enduring and sufferings of other folks first hand; he deserted his privileges to seek living of an ascetic in search of real truth and way to happiness. After many years of wandering the county-side, residing a life of deprive, Siddhartha made a decision to seek middle way. The middle way seeks and avoidance of extremes, self mortification. He thought there could be conciliation in between wretched self denial as well as lifestyle in the typical world.

After much deep meditation, Siddhartha became an enlightened one – The Buddha. His discoveries and philosophy is later termed as Buddhism.

Buddhism is really a philosophy according to empathy to attain enlightenment known as “Nirvana.” Buddhism explains the truth that the main cause of sufferings and unhappiness is our very own condition of mind and exactly how we see things. When we initiate to purify our mind and soul with the aid of Vipassana Meditation, ultimately, achieving of evergreen happiness free from sorrow and discomfort known as “Nirvana” is possible. - Strong Belief of Amogh Shakya MD Shakya Handicraft.


One day, As per the custom, when Buddha went to Tushita Bhuwan: (Heaven according to ancient belief, where Mayadevi's spirit resided after her death here on earth) to preach his late mother, the king could not surpass his absence so he had artisans to make the replica of him in sandalwood. The statue was made at the place where he was seated when he returned home after getting enlightenment and give his dharma discourse. It is believed The first Buddha was made like this and believed then that the statue will represent the teaching of the Buddha and be inspiration for the followers in future.

What is the meaning of Buddha statues?

What does different symbols of a Buddha statue represent?

Generally there are different types of Buddha Statues with different body posture, hand gestures and symbols. You can check in details under the following sections below. However in this paragraph we are discussing the symbols of a simple meditating enlightened Buddha that we most often see that is Shakyamuni Buddha. Shakyamuni is the one who got enlightened and seated in a lotus flower with legs folded and one had touching the ground.

Most of the other forms of peaceful Buddha holds the same nature, description and symbols in his body. So lets get into it and cover the different meaning of the body parts and symbols he carries. Buddha's hair is usually short with curly  shape. It is stated in ancient stories and beliefs that Buddha when he left palace in search of truth cut his hair and never looked back and went for long meditation course. It is when after 4 years of meditation he actually got enlightened hi hair has never grown longer but remained short and curly like you will see in the Buddha heads.

The over all face should express the compassion. Buddha eyes have to be the most beautiful and compassionate one. It is always in a state of meditation with compassion looking at his disciples. Buddha ears are long representing long life and also represents the Buddhas willingness to listen to those who need and enlighten them. To learn more on this check this article out.  Why does Buddha have long ears?

Buddha's body wears a robe Only half or parts of his body is covered with robe. So flesh is seen partially. He is seated and one hand touches ground. This position is called "Bhumisparsa Mudra" This position means that Buddha after getting enlightenment called earth as a witness to what he learned and calling himself as a Buddha . It is believed tht Buddha stayed four days under the bodhi tree revising what he learned and discovered to finally call himself a Buddha after confirmation of his discovery or enlightenment.

Hand gestures (called mudras) have different meanings, such as teaching or protection etc. We will get into more details on these below. But Shakyamni Buddha has one bowl on his hand.

A dot or tika on the forehead is called third eye that represents the wisdom he has to see this world in whole different way wisely. A full mouth represent the ability of excellent speech or verbal skills. To be able to present himself and teach and explain the concepts of his teachings or dharma.

Even arms slim fingers represents logic without emotions that leads to diagnosing or analyzing things with out prejudice. This also further explains about his mindfulness because of which Buddha can act with pure and precise mind. Having explained the general anatomy of a peaceful Buddha statue lets focus on few of the most common or popular hand gestures of a Buddha statue.


"Mudra" is the Sanskrit word which means hand gestures and finger postures that are used in Buddhism. Such Buddha mudra is associated with the images of Buddhas and Bodhisattvas to represent different teachings and philosophy of Buddhism.

A statue or a painting of Buddha always illustrates a Mudra. Among hundreds of mudras, the five transcendental Buddha’s also called “Dhyani Buddhas” or “Pancha Buddhas” bear the most important mudras. These mudras are as follows.

Dharmachakra Mudra has two hands held against the chest with the tips of the thumbs and forefingers of each hand united. This mudra represents a gesture of Teaching.

This gesture, “touching the earth” (Bhumisparsa) Mudra, became Buddha Akshobhya's Mudra. Buddha Shakyamuni asked mother earth to bear witness to his attainment of Enlightenment. To indicate this, he touched the earth with his right hand as witness to his perfection. Thus, this mudra is formed.

Varada Mudra. His right hand lies open near his right knee. His left hand is seen holding an alms bowl. In Sanskrit, Varada means 'granting a boon'. The gesture shows the right palm turned towards the receiver of boons, with the fingers pointed downwards.

This Mudra has palms joined together with the right on the left, two thumb fingers touching each other. As bowl is between his two palms. Here the meditating hand gesture represents state of deep meditation and the unity of wisdom and compassion.

Abhaya mudra- The hand gesture of fearlessness and protection, usually shown as the left hand with palm turned outward and all fingers extended upwards. It is taught with this hand gesture that one gains fearlessness by following the Bodhisattva path.

Each Dhyani Buddha has corresponding or relevant female deity or consort and Bodhisattva.These deities themselves have unique mudras and positions. To know more on this do check out this article "Buddha Mudra.."

What are different types of Buddha statues?

There are various types of them like Standing Buddha, sleeping Buddha, laughing Buddha, blessing Buddha, meditating Buddha, teaching Buddha etc. Different positions from the statues hold different meanings and teachings. You need to understand these postures before choosing the right ones for you. You can check this post on learning more about different hand gestures of a Buddha statue called "Mudras"

Meditation is the ultimate tool for achieving enlightenment. It is greater than Buddha himself because  without the help of meditation Buddha would not have attained enlightenment and he would not have become or called "Buddha" Meditation is the process of looking within yourself. It is about knowing yourself inside out. Just like a doctor diagnosis its patients we need to diagnose ourselves the problems within us. We need to find out what is it that is keeping us from being happy. We will find out how our mind works and what sorts of thoughts and imaginations we constantly dwell in. Please refer to this article to learn more about benefits of meditation.