Who is Shakyamuni Buddha? 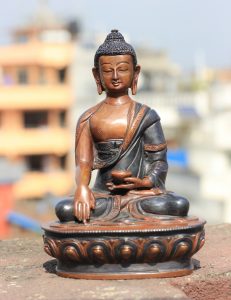 Shakyamuni Buddha was born in Kapilvastu District, Lumbini Zone (Nepal) in between 563 and 483 BC. He was born in a shakya clan to father King Suddhodana and Queen Mahamaya the mother. Siddhartha Gautama is believed to have reincarnated thousands of times as a Bodhisattva to earn good karma, a prerequisite towards becoming a Buddha.

According to ancient legend, Siddhartha Gautama's mother, Mahamaya Devi had a premonitory dream: A white elephant with six tusks descended from the heavens surrounded by a chorus of beatific praises. The elephant approached her, holding a pink lotus flower in its trunk, and placed the flower within the queen's body. Then the elephant entered her body with ease, and she experienced deep sense of bliss and harmony.

The king summoned holy men to interpret the meaning of the queen's dream..Their conclusion: "The queen will give birth to a son who will be a great leader. He is destined to become either a mighty emperor who rules throughout the four directions, or a great Teacher who will show the Way of Truth to all beings in Heaven and Earth." The queen's dream turned out to be an auspicious omen of the advent of someone special. Keeping to the tradition of those days, the queen visited her parental home to give birth. On the way, there lie the beautiful garden of Lumbini.

She decided to take some rest in the garden. It was a lovely spring day. Flowers were in full bloom, birds were singing delightfully. Engrossed in the pleasure of the moment, queen Mahamaya suddenly felt uneasy, she was about to have childbirth. Standing and holding a tree branch with one hand, Queen Mahamaya gave birth to Siddhartha Gautama. As soon as he came out of the queen's womb, prince Siddhartha walked 7 steps towards the four cardinal directions highlighting his divine origin.. There is an old statue presiding inside the Lumbini museum of Nepal which depicts that scene of nativity.

King Suddhodana sought the help of a Brahmina who referred to the three Vedas to name the child as Siddhartha Gautama which means " one whose mission is accomplished". It was only after prince Siddhartha received enlightenment that he became renowned as Shakyamuni Buddha, which means " the enlightened one"

Siddhartha Gautama as Prince Siddhartha in his youth

In his youth, prince Siddhartha was exceptionally intelligent, strong and artistic, surpassing all others in his generation. Married Yasodhara at the age of seventeen, who gave birth to a son, Rahula. Sufferings of mankind like sickness, old age and death deeply disturbed young prince Siddhartha. Seeking the truth behind human suffering and meaning of existence, prince

Prince Siddhartha renouncing of royal life in search of enlightenment.

Siddhartha renounced his royal life to become an ascetic at the age of twenty nine in search of a solution to the four sufferings common to all people: birth into this troubled world, sickness, old age and death. He headed towards the mountains near the Nairanjana River where he spent six years.

Several years of suffering and penance of ascetic life, however,lead him to conclude that attempting to overcome human suffering and desire through self-denial and force of will was counter productive. Instead he preferred technique of moderation and balance.But his moderate stance disillusioned some Brahmin followers who abandoned Siddhartha Gautama saying that their master had lost spiritual fervor.

Nevertheless, Siddhartha continued this approach. He began the historic meditation under a large bodhi tree near Bodhgaya ( at present in North India). on a full moon day around 588 BC, Siddhartha Gautama attained Nirvana, the liberation from the cycle of birth and death. the next forty-five years of his life was dedicated towards preaching the dharma (Sacred knowledge revealed through enlightenment) among the masses.

In Buddhist philosophy, enlightenment is a state in which one comes to understand the true nature of reality and is released from the endless cycle of birth and rebirth that defines earthly existence. That auspicious moment is reflected in all of Buddha's sculptures.

Shakyamuni Buddha's teaching and popularity in the world

Shakyamuni Buddha's message of peace, compassion and humanity spread as far as China and Japan in the East to Afghanistan and central Asia to the west. By the time, he died at the age of eighty in the city of Kusinagara, Buddhism had become a world religion. Buddhism took different forms as it spread in two main forms, the Theravada (or Hinayana - 'lesser vehicle') and the Mahayana ('greater vehicle').

Today Buddhism is adhered by one fifth of humanity. Shakyamuni Buddha's teaching of compassion, moderation and self communion with universal spirit is as relevant today as it was twenty six centuries ago. There is an interesting contradiction in contemporary Buddhism. Although Buddha himself never condoned idol worshipping, the most popular form of statue in the world is of Shakyamuni Buddha himself, usually in the lotus posture.

Check here of more pictures and statues of Shakyamuni Buddha

This site uses Akismet to reduce spam. Learn how your comment data is processed.